Relying on its long-term commitment and unique innovative design, Boyaa Interactive has developed more than 60 online games through independent R&D and multi-platform refined operation, most of which are classical card and board games, such as Boyaa Texas Poker, 9K (Thai), Pokdeng (Thai), Remi (Indonesia), Cangkulan (Indonesia), etc.

Boyaa Interactive has an advanced independent research and development system;the ratio of technical staffs is up to 70%. Now, Boyaa Interactive has accumulated a considerable number of patents in 4 areas: storage technology, data mining, distributed network and engine technology. The amount of patent applications are at the forefront of card and board game industry.

In recent years, Boyaa Interactive has achieved a solid and a permanent expansion in both Chinese and overseas markets. Now Boyaa Interactive owns more than 600 million total registered users, located in more than 100 countries and regions. The strong game localization capability enables Boyaa Interactive to re-package games in local languages while perfecting game features to meet local culture tastes as well as market needs. Take Texas Hold'em Poker —the most popular game of Boyaa Interactive, as an example—the game is available in 17 language versions.

A sophisticated technical infrastructure, data analysis, and a responsible customer service make Boyaa Interactive provide exceptional player experiences and attracting player communities continuously. Through these efforts, Boyaa Interactive has built its leading brand image in the card and board games industry. In 2014, Boyaa Interactive was listed in the top of China's Top 100 SMEs with strong potential published by "Forbes" magazine. Then, in the year of 2016, Boyaa Interactive was awarded with the "Most Potential Listed Company", which was issued by the "Chinese Companies Financial Awards". Also in the same year, Boyaa became an official strategic partner of the General Administration of Sport of China.

Boyaa Interactive is committed to offer stimulating and entertaining multi-platform gaming experiences for players of all ages and societies to implement its enterprise's slogan —"Share the Happiness Anywhere Anytime". Players could easily download Boyaa games in the version which suits them better, through mobile terminal, computer as well as TV to enjoy Boyaa games by followng the motto "Anywhere and Anytime".

Be one of the sponsors of the TOP Smart Board Games Alliance.

Awarded with The most growth listed companies of 2016 during the Golden Hong Kong Stocks ceremony.

Continuously awarded as "The Most Promising Listed Company", issued by China Financial Market.

Successfully holds the Boyaa Poker Tour(BPT) in Sanya consecutively, which contributed an essential element to China Rendez-Vous in December.

Holds the second BPT in Macau, which attracted 300 players from 16 countries to this worldwide poker tournament in October.

Gets the award of "The Most Promising Listed Company" of 2015, issued by the China Financial Market.

Thai branch implements the charity program "Love and donate", to donate learning and daily use items to poor students. Boyaa Interactive abides by its social responsibility through this program.

Launches the new custom-made game "LeTV Fight the Landlord" with the cooperation of LeTV. It creates a new model of live broadcasting for card and board game online tournaments.

Holds the first Boyaa Poker Tournament (BPT) with a main prize of $500,000. The championship went to China Mainland participant—Mai Jie.

Opens a branch in Indonesia and launches the local games "Domino Solitaire" and "Domino 99."

Ranks top among the "Chinese Most Promising SMEs", according to Forbes.

Starts to shift its development strategy to the online card and board games domain.

Boyaa Interactive has achieved a steady growth in its global expansion process. In fact, it currently operates in more than 100 countries, having reached an impressive figure of 700 billion registered users. 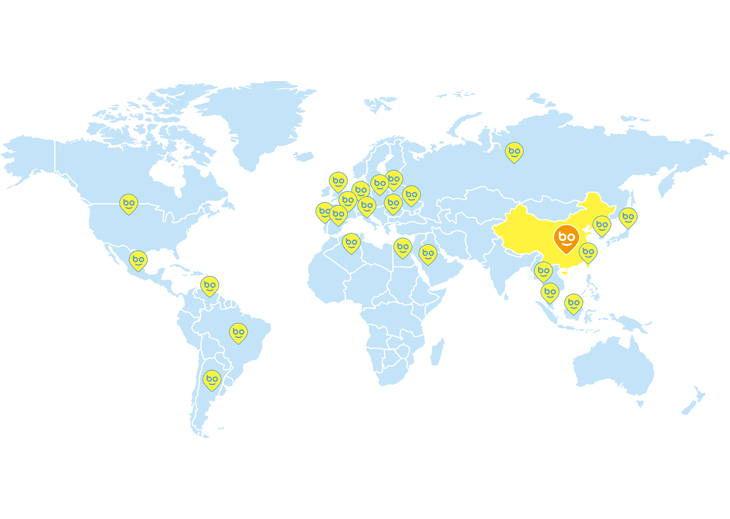 One of the main keys to Boyaa Interactive's successful development lies in the fact that its high-quality games have been widely recognized by mainstream distribution platforms, which ensures the long-term sustainability of the business. Web games are primarily distributed on social networks sites such as Facebook, as well as Boyaa's own platform. Mobile games, on the other hand, mainly run through major online app stores, like Apple Store and Google Play.

This diversified strategy, for both the customized products and distribution platforms, has worked as a spearhead to penetrate local markets and also as a safeguard net that protects the company from the risks of depending too much on a single platform, game or country.